Make all seat adjustments before you start driving. 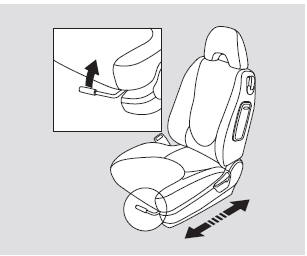 To adjust the seat forward and backward, pull up on the lever under the seat cushion’s front edge. Move the seat to the desired position, and release the lever. Try tomove the seat to make sure it is locked in position. 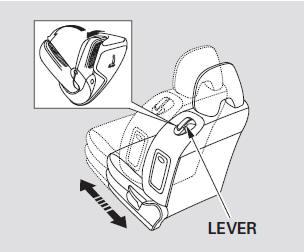 The seat can also be adjusted forward and backward using the lever on the side of the seat-back.

Pull out the lever and push it forward, holding the seat-back with your hand.

Move the seat to the desired position, and check the seat tomake sure it is locked in position. 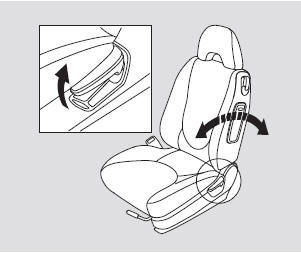 To change the seat-back angle of the front seat, pull up the lever on the outside of the seat bottom. 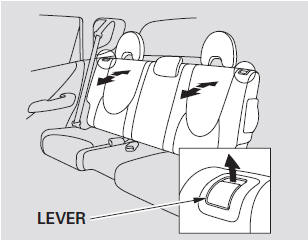 You can adjust the angle of the rear seat-backs separately. To change the seat-back angle, pull up the release lever on the outer side of the seatback.

Your vehicle is equipped with head restraints in all seating positions to help protect you and your passengers from whiplash and other injuries. 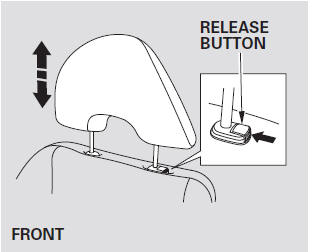 Failure to reinstall the head restraints can result in severe injury during a crash. 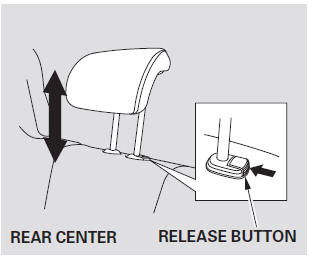 Make sure the head restraint locks in position when you reinstall it.

2. Remove the front head restraints, and store them securely.

Reverse this procedure to return the front seats to the upright position.

Make sure you install the head restraints and securely lock the seats before driving.

The left and right rear seat cushions can be lifted up separately to make room for cargo.

Remove any items from the seat before you fold up the seat cushion. 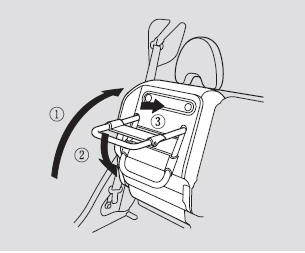 Pull up the rear seat cushion, and fold the seat leg down. Push the seat cushion firmly against the seat-back to lock it. 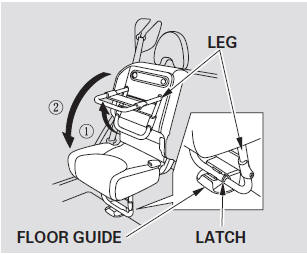 Folding the Rear Seat Down

The rear seat-backs can be folded down for more cargo room.

Each side folds down separately, so you can still carry a passenger in the rear outer seating position.

Remove any items from the seat before folding down the seat-back.

Make sure there are no items on the floor before folding down the seats. 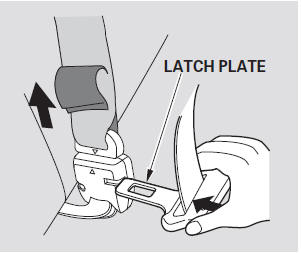 When you fold down the driver’s side rear seat, use the latch plate to release the center seat belt from the detachable anchor.

Allow the seat belt to retract into the holder on the ceiling, and store the buckles in it.

1. Move the front seat cushions as far forward as possible. 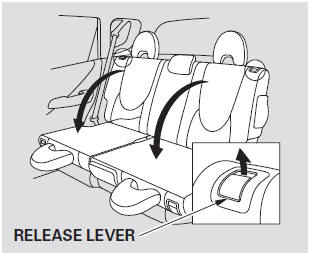 3. Pull up the release lever on the outside of the seat-back.

5. Move the front seat backward to the desired position. Make sure the seat is locked in place.

Do not put any heavy items on the seat-back when it is folded down.

To return the seat-back to its upright position, move the front seat forward again, then lift up the seat-back.

While lifting the seat-back, the seat cushion may come up with it.

Make sure all items in the cargo area are secured. Loose items can fly forward and cause injury if you have to brake hard.

The seat belt in the rear center seat is equipped with a detachable anchor.

This allows the center seat belt to be unlatched when the driver’s side rear seat is folded.

Using a seat belt with the detachable anchor unlatched increases the chance of serious injury or death in a crash. 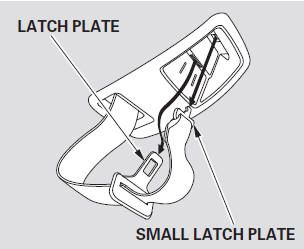 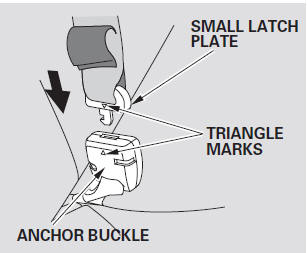 Line up the triangle marks on the small latch plate and anchor buckle when reattaching the belt and buckle. 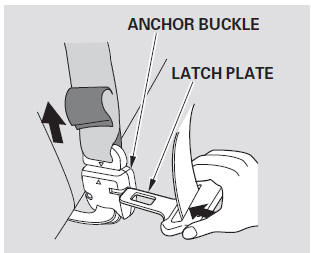 Rear Brake Hose Replacement
Raise and support the vehicle. Remove the rear wheel. Disconnect the brake hose (A) from the brake line (B) using a 10 mm flare-nut wrench (C). ...

If the Charging System Indicator Comes On
■ Reasons for the indicator to come on Comes on when the battery is not being charged. ■ What to do when the indicator comes on Turn off the heating and cooling* system, rear defogg ...