The ignition switch must be in ACCESSORY

To use HFL, you must first pair your Bluetooth-compatible cell phone to the system while the vehicle is parked. 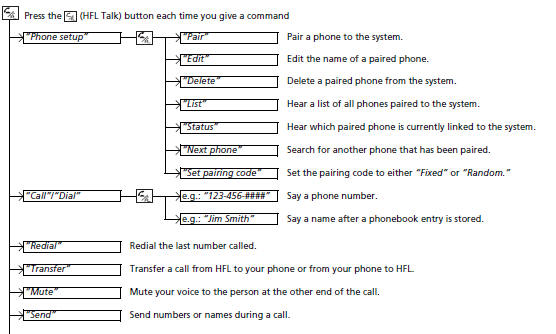 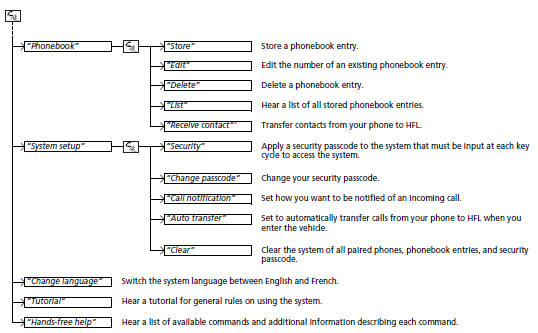 ■ To pair a cell phone

1. If no phone has been paired to the system before, HFL gives you information about how to pair the first phone.

If a phone has already been paired: say “Phone Setup” and “Pair” after the HFL prompts.

2. Follow the HFL prompts and put your phone in discovery or search mode.

► HFL gives you a four-digit code and begins searching for your phone.

3. When your phone finds a Bluetooth® device, select HFL from the options and enter the four-digit code.

4. Follow the HFL prompts and name the newly paired phone.

■ To rename a paired phone

► If there is more than one phone paired to the system, HFL will ask you which phone’s name you want to change.

■ To delete a paired phone

2. Say “Delete” after the prompts.

► HFL will ask you which phone you want to delete.

button and wait for a
beep before giving a command.

Your Bluetooth-compatible phone must be paired to HFL before you can make and receive hands-free calls.

Your Bluetooth-compatible phone must be paired to HFL before you can make and receive hands-free calls.

• You cannot pair your phone while the vehicle is moving.

• Up to six phones can be paired.

• Your phone’s battery may drain faster when it is paired to HFL.

• If your phone is not ready for pairing or not found by the system within three minutes, the system will time out and returns to idle.

■ To hear the name of all paired phones

3. HFL reads out all the paired phones’ names.

■ To hear which paired phone is currently linked

2. Say “Status” after the prompts.

3. HFL will tell you which phone is linked with the system.

■ To change the currently linked phone

2. Say “Next Phone” after the prompts.

3. HFL disconnects the current phone, and searches for another paired phone.

4. Once another phone is found, it is connected to the system. HFL will inform you which phone is now linked.

■ To change the pairing code setting

3. If you want HFL to create a random code each time you pair a phone, say “Random.” If you want to create your own four-digit code, say “Fixed.”

If no other phones are found or paired when trying to switch to another phone, HFL will inform you that the original phone is linked again.

The “Status” and “Next Phone” commands use: Only one paired phone at a time can be linked to HFL.

When there are two or more paired phones in the vehicle, the first paired phone that the system finds is linked.

You can make calls using any phone number or a name in the HFL phonebook, and redial the last number called.

2. Say the number you want to dial after the prompts.

■ From the HFL phonebook

2. Say the name stored in the HFL phonebook after the prompts.

■ To redial the last number called by HFL

HFL uses a Class 2 Bluetooth, with has a maximum range of about 30 feet (10 meters).

HFL allows you to talk up to 30 minutes after you remove the key from the ignition switch. However, this may weaken the vehicle’s battery.

button to answer the
call, or the

button to hang up.
When there is an incoming call, a call notification (if activated) sounds and a message appears on the display.

button and put the
original call on hold to answer the incoming call.

button again to return to
the original call.

Ignore the incoming call if you do not want to answer it.

button if you want to
hang up the original and answer the incoming call.

You can transfer a call from HFL to your phone, or from your phone to HFL. Press the

To mute or unmute your voice during a call, press and release the

Sending Numbers or Names During a Call

You can send numbers and names during a call. This is useful when calling a menudriven phone system.

■ To send a number or name during a call

2. Say the number or name you want to send after the prompts.

the button before a
command.

You can store up to 50 names with their associated numbers in HFL. The numbers you store can be account numbers or passwords. These numbers can be sent to an automated phone system.

■ To store a phonebook entry

3. Say a name you want to list as your phonebook entry.

4. Say the number you want to store for the name entry.

5. Follow the HFL prompts and say “Enter” to store the entry.

■ To edit the number stored for a name

3. Say a name you want to edit. When asked, say the new number for that name.

4. Follow the HFL prompts and say “Enter” to store the entry

• It is easier for HFL to recognize a multisyllabic or longer name. For example, use “Peter” instead of “Pete,” or “John Smith” instead of “John.”

■ To delete a name

2. Say “Delete” after the prompts.

3. HFL begins reading the names in the order they were stored.

3. Follow the HFL prompts, select a number from your cell phone, and send it to HFL.

4. Follow the HFL prompts and name the number, or say “Discard” if it is not the number you want to store.

This command group allows you to change or customize HFL basic settings.

3. Follow the HFL prompts and say the four-digit number of your choice.

■ To change the security passcode

2. Say “Change Passcode” after the prompts.

3. Say the new four-digit passcode after the HFL prompts.

2. Say “Call Notification” after the prompts.

3. Say “Ring Tone” or “Prompt” after the prompts. For no audible notification, say “Off.”

Once a passcode is set, you are required to enter the passcode with every new key cycle to use HFL.

If you forget the code, go to your dealer to have the passcode reset. You can also cancel the passcode by clearing all the data stored in the HFL system.

The default setting of the incoming notification is a ring tone.

■ To activate or deactivate the auto transfer function

The call on your cell phone can be automatically transferred to HFL when you get into the vehicle and turn on the ignition switch.

2. Say “Auto Transfer” after the prompts. HFL lets you know the current status.

■ To clear the system

Paired phones, all stored or imported phonebook data, and any passcodes are erased.

You can clear the system when you have forgotten the passcode and cannot access HFL.

When HFL asks you for the passcode, say “System Clear.”

You can set the system language to French or English.

If you have not named your paired phone in the selected language, HFL will ask you to name it in that language.

Selecting a Destination on the Map
Select a new destination when en route by selecting a location on the map. 1. Scroll the map to position the cursor over your desired destination, adjusting the map scale as necessary. Press the ...