This system uses the same sensors as the front airbags to monitor whether the front seat belts are latched or unlatched, and how much weight is on the front passenger’s seat.

The seat belt system includes an indicator on the instrument panel and a beeper to remind you and your passengers to fasten your seat belts.

If a front passenger does not fasten their seat belt, the indicator will come on about 6 seconds after the ignition switch is turned to the ON (II) position.

If either the driver or a front passenger does not fasten their seat belt while driving, the beeper will sound and the indicator will flash again at regular intervals.

When no one is sitting in the front passenger’s seat, or a child or small adult is riding there, the indicator should not come on and the beeper should not sound

If the indicator comes on or the beeper sounds when the driver’s seat belt is latched and there is no front seat passenger and no items on the front seat, something may be interfering with the monitoring system. Look for and remove:

• Any items under the front passenger’s seat.

• Any object(s) hanging on the seat or in the seat-back pocket.

• Any object(s) touching the rear of the seat-back.

If no obstructions are found, have your vehicle checked by a dealer.

To fasten the belt, insert the latch plate into the buckle, then tug on the belt to make sure the buckle is latched.

To unlock the belt, press the red PRESS button on the buckle.Guide the belt across your body so that it retracts completely. After exiting the vehicle, be sure the belt is out of the way and will not get closed in the door.

All seat belts have an emergency locking retractor. In normal driving, the retractor lets you move freely in your seat while it keeps some tension on the belt. During a collision or sudden stop, the retractor automatically locks the belt to help restrain your body.

The seat belts in all positions except the driver’s have a lockable retractor that must be activated to secure a child seat.

If the shoulder part of the belt is pulled all the way out, the lockable retractor will activate. The belt will retract, but it will not allow the passenger to move freely.

To deactivate the lockable retractor, unlatch the buckle and let the seat belt fully retract. To refasten the seat belt, pull it out only as far as needed. 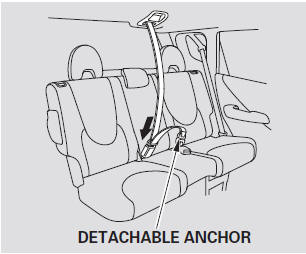 The lap/shoulder belt in the center seating position on the rear seat is equipped with a detachable seat belt that has two parts: a small latch plate and an anchor buckle.

The detachable seat belt should normally be latched whenever the seat-backs are in an upright position.

For more information about the detachable seat belt. 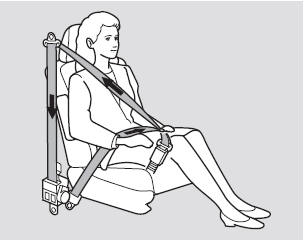 For added protection, the front seat belts are equipped with automatic seat belt tensioners. When activated, the tensioners immediately tighten the belts to help hold the driver and a front passenger in position.

The tensioners are designed to activate in any collision severe enough to cause the front airbags to deploy.

If a side airbag or side curtain airbag deploys during a side impact, the tensioner on that side of the vehicle will also deploy.

The tensioners can also be activated during a collision in which the front airbags do not deploy. In this case, the airbags would not be needed, but the additional restraint could be helpful.

When the tensioners are activated, the seat belts will remain tight until they are unbuckled.

For safety, you should check the condition of your seat belts regularly.

Pull each belt out fully, and look for frays, cuts, burns, and wear. Check that the latches work smoothly and the belts retract easily. If a belt does not retract easily, cleaning the belt may correct the problem. Any belt that is not in good condition or working properly will not provide good protection and should be replaced as soon as possible.

The dealer should also inspect the anchors for damage and replace them if needed. If the automatic seat belt tensioners activate during a crash, they must be replaced.

Not checking or maintaining seat belts can result in serious injury or death if the seat belts do not work properly when needed.

Check your seat belts regularly and have any problem corrected as soon as possible.

Parking Brake
To apply the parking brake, pull the lever up fully. To release it, pull up slightly, push the button, and lower the lever. The parking brake indicator on the instrument panel should go out when ...

Changing the Route Preference
Change the route preference by selecting minimum or maximum driving methods. 1. Select MIN or MAX for each item. 2. Select OK. The calculated route may not be the route you would choose. For saf ...

Manual Transmission
The manual transmission is synchronized in all forward gears for smooth operation. It has a lockout so you cannot shift directly from fifth to reverse. When shifting up or down, make sure you pu ...