After adjusting a front seat to the proper position, and while sitting upright and well back in the seat: 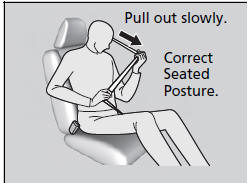 1. Pull the seat belt out slowly. 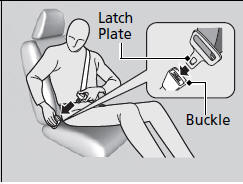 2. Insert the latch plate into the buckle, then tug on the belt to make sure the buckle is secure.

► Make sure that the belt is not twisted or caught on anything.

No one should sit in a seat with an inoperative seat belt or one that does not appear to be working correctly. Using a seat belt that is not working properly may not protect the occupant in a crash.

Have a dealer check the belt as soon as possible.

Never insert any foreign objects into the buckle or retractor mechanism. 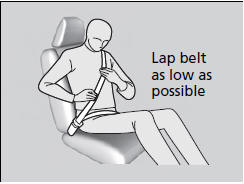 4. If necessary, pull up on the belt again to remove any slack, then check that the belt rests across the center of your chest and over your shoulder. This spreads the forces of a crash over the strongest bones in your upper body.

WARNING
Improperly positioning the seat belts can cause serious injury or death in a crash.

To release the belt, push the red PRESS button then guide the belt by hand until it has retracted completely.

When exiting the vehicle, be sure the belt is out of the way and will not get caught by closing the door.

The front seats have adjustable shoulder anchors to accommodate taller and shorter occupants. 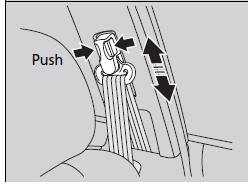 1. Move the anchor up and down while holding the release button.

2. Position the anchor so that the belt rests across the center of your chest and over your shoulder.

The shoulder anchor height can be adjusted to four levels. If the belt contacts your neck, lower the height one level at a time.

After an adjustment, make sure that the shoulder anchor position is secure. 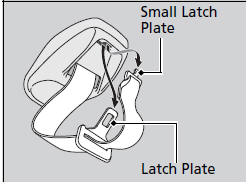 1. Pull out the seat belt’s small latch plate and the latch plate from each holding slot in the ceiling. 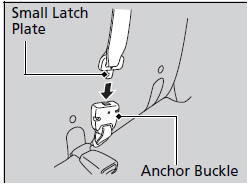 2. Line up the triangle marks on the small latch plate and anchor buckle. Make sure the seat belt is not twisted. Attach the belt to the anchor buckle. 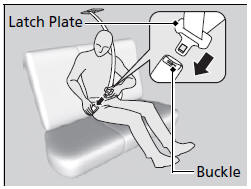 3. Insert the latch plate into the buckle.

WARNING
Using the seat belt with the detachable anchor unlatched increases the chance of serious injury or death in a crash.

To unlatch the detachable anchor, insert the latch plate into the slot on the side of the anchor buckle. 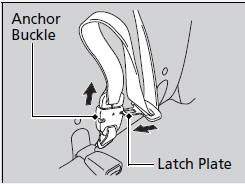 If you are pregnant, the best way to protect yourself and your unborn child when driving or riding in a vehicle is to always wear a seat belt and keep the lap part of the belt as low as possible across the hips. 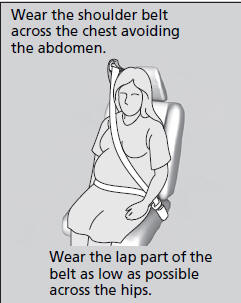 Each time you have a checkup, ask your doctor if it is okay for you to drive.

To reduce the risk of injuries to both you and your unborn child that can be caused by an inflating front airbag:
• When driving, sit upright and adjust the seat as far back as possible while allowing full control of the vehicle.

• When sitting in the front passenger’s seat, adjust the seat as far back as possible.

About Your Audio System
On models with navigation system, see the Navigation System Manual for operation of the audio system, and Bluetooth®HandsFreeLink®. The audio system features FM/AM radio. It can also play audi ...