Honda Fit: About Your Seat Belts

Seat belts are the single most effective safety device because they keep you connected to the vehicle so that you can take advantage of many built-in safety features. They also help keep you from being thrown against the inside of the vehicle, against other passengers, or out of the vehicle. When worn properly, seat belts also keep your body properly positioned in a crash so that you can take full advantage of the additional protection provided by the airbags.

In addition, seat belts help protect you in almost every type of crash, including:
- frontal impacts
- side impacts
- rear impacts
- rollovers

All five seating positions are equipped with lap/shoulder seat belts with emergency locking retractors. In normal driving the retractor lets you move freely while keeping some tension on the belt. During a collision or sudden stop the retractor locks to restrain your body. The rear seat belts also have a lockable retractor for use with child seats.

WARNING
Not wearing a seat belt properly increases the chance of serious injury or death in a crash, even though your vehicle has airbags.

Be sure you and your passengers always wear seat belts and wear them properly.

Seat belts cannot completely protect you in every crash. But in most cases, seat belts can reduce your risk of serious injury.

Most states and all Canadian provinces and territories require you to wear seat belts.

■ Proper use of seat belts

Follow these guidelines for proper use: • All occupants should sit upright, well back in the seat, and remain in that position for the duration of the trip. Slouching and leaning reduces the effectiveness of the belt and can increase the chance of serious injury in a crash.

• Never place the shoulder part of a lap/shoulder seat belt under your arm or behind your back. This could cause very serious injuries in a crash.

• Two people should never use the same seat belt. If they do, they could be very seriously injured in a crash.

• Do not put any accessories on the seat belts. Devices intended to improve comfort or reposition the shoulder part of a seat belt can reduce the protective capability and increase the chance of serious injury in a crash.

If a rear seat passenger moves around and extends the seat belt, the lockable retractor may activate. If this happens, release the retractor by unfastening the seat belt and allow the belt to retract completely.

Then refasten the belt. 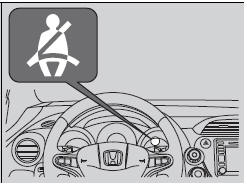 Your vehicle monitors front seat belt use. If the ignition switch is turned to ON

The beeper will also periodically sound and the indicator will blink while driving until the driver’s and front passenger’s seat belts are fastened.

When no one is sitting in the front passenger’s seat, or a child or small adult is riding there, the indicator will not come on.

This is because the weight sensors in the seat cannot detect their presence.

The front seats are equipped with automatic seat belt tensioners to enhance safety.

The tensioners automatically tighten the front seat belts during a moderate-tosevere frontal collision, sometimes even if the collision is not severe enough to inflate the front airbags. 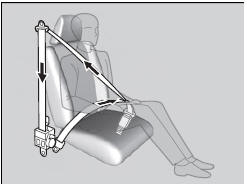 The seat belt tensioners can only operate once.

If a tensioner is activated, the SRS indicator will come on. Have a dealer replace the tensioner and thoroughly inspect the seat belt system as it may not offer protection in a subsequent crash.

Fuel Economy
Improving Fuel Economy Fuel economy depends on several conditions, including driving conditions, your driving habits, the condition of your vehicle, and loading. Depending on these and other co ...