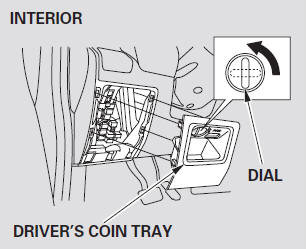 The vehicle’s fuses are contained in three fuse boxes.

The interior fuse box is behind the driver’s coin tray. To access it, remove the tray by turning the dial counterclockwise then pulling it toward you. To install the coin tray, line up the tabs on the bottom, pivot the tray up to engage its side clips, then turn the dial clockwise. 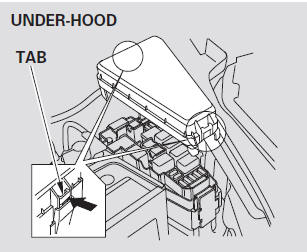 The primary under-hood fuse box is in the engine compartment on the driver’s side. To open it, push the tabs as shown. 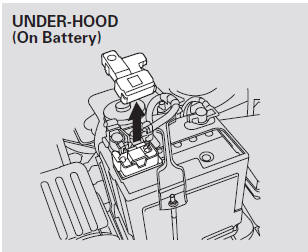 The secondary fuse box is on the positive terminal of the battery.

If something electrical in your vehicle stops working, check for a blown fuse first. Determine from the chart on pages and , or the diagram on the fuse box lid, which fuse or fuses control that device.

Check those fuses first, but check all the fuses before deciding that a blown fuse is the cause. Replace any blown fuses, and check if the device works.

1. Turn the ignition switch to the LOCK (0) position. Make sure the headlights and all other accessories are off.

2. Remove the cover from the fuse box. 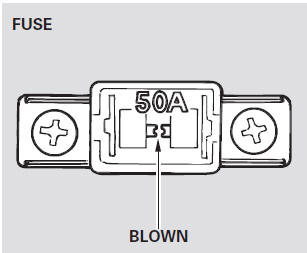 3. Check each of the large fuses in the under-hood fuse boxes by looking through the top at the wire inside. Removing these fuses requires a Phillips-head screwdriver. 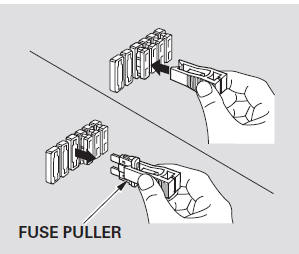 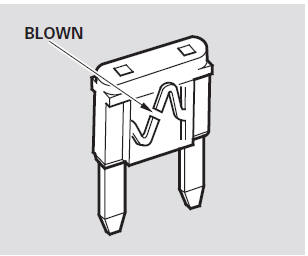 5. Look for a blown wire inside the fuse. If it is blown, replace it with one of the spare fuses of the same rating or lower.

If you cannot drive the vehicle without fixing the problem, and you do not have a spare fuse, take a fuse of the same rating or a lower rating from one of the other circuits. Make sure you can dowithout that circuit temporarily (such as the accessory power socket or radio).

If you replace the blown fuse with a spare fuse that has a lower rating, it might blow out again. This does not indicate anything wrong. Replace the fuse with one of the correct rating as soon as you can.

Replacing a f use with one that has a higher rating greatly increases the chances of damaging the electrical system. If you do not have a replacement f use with the proper rating f or the circuit, install one with a lower rating.

6. If the replacement fuse of the same rating blows in a short time, there is probably a serious electrical problem in your vehicle.

If the radio fuse is removed, the audio system will disable itself. The next time you turn on the radio you will see ‘‘ENTER CODE’’ in the frequency display. Use the preset buttons to enter the five-digit code.

Front Passenger's Airbag Replacement (Removal)
NOTE: If replacing the front passenger's airbag after deployment, refer to Component Replacement/Inspection After Deployment   for a complete list of other parts that must also be r ...

Side Impact Sensor (Second) Replacement
Removal Do the battery terminal disconnection procedure, then wait at least 3 minutes before starting work. Remove the cargo area side trim. Disconnect the side ...

Database
The digitized map database reflects conditions as they existed at various points in time before production. Accordingly, your database may contain inaccurate or incomplete data or information due ...