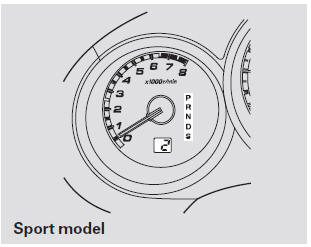 These indicators on the instrument panel show which position the shift lever is in.

The ‘‘D’’ indicator comes on for a few seconds when you turn the ignition switch to the ON (II) position. If it flashes while driving (in any shift position), it indicates a possible problem in the transmission. 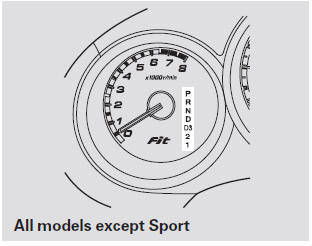 If the malfunction indicator lamp comes on along with the ‘‘D’’ indicator, there is a problem with the automatic transmission control system. Avoid rapid acceleration, and have the transmission checked by your dealer as soon as possible. 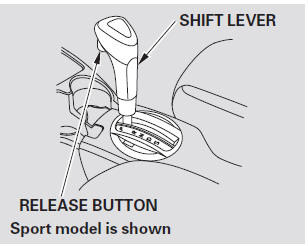 To shift from Park to any position, press firmly on the brake pedal and press the release button on the front of the shift lever, then pull the lever.

You cannot shift out of Park when the ignition switch is in the LOCK (0) or the ACCESSORY (I) position. 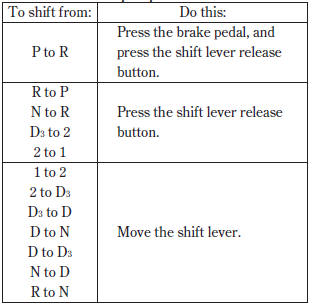 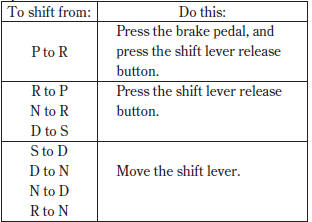 This position mechanically locks the transmission. Use Park whenever you are turning off or starting the engine. To shift out of Park, you must press on the brake pedal and have your foot off the accelerator pedal. Press the release button on the front of the shift lever to move it.

If you have done all of the above and still cannot move the lever out of Park.

To avoid transmission damage, come to a complete stop before shifting into Park. You must also press the release button to shift into Park. The shift lever must be in Park before you can remove the key from the ignition switch.

Use neutral if you need to restart a stalled engine, or if it is necessary to stop briefly with the engine idling. Shift to the Park position if you need to leave your vehicle for any reason. Press on the brake pedal when you are moving the shift lever from neutral to another gear.

Use this position for your normal driving. The transmission automatically selects a suitable gear (1 through 5) for your speed and acceleration. You may notice the transmission shifting up at higher engine speeds when the engine is cold. This helps the engine warm up faster.

This position is similar to D, except only the first three gears are selected. Use D to provide engine braking when going down a steep hill. D can also keep the transmission from cycling between third and fourth gears in stop-and-go driving.

To shift to second, press the release button on the front of the shift lever. This position locks the transmission in second gear. It does not downshift to first gear when you come to a stop.

Use second gear:
• For more power when climbing.

• To increase engine braking when going down steep hills • For starting out on a slippery surface or in deep snow.

To shift from second to first, press the release button on the front of the shift lever. This position locks the transmission in first gear.

By upshifting and downshifting through 1, 2, D , and D, you can operate the transmission much like a manual transmission without a clutch pedal.

To shift into the S position, press the release button on the front of the shift lever, and move the lever to S. This position is similar to D, except only gears from first to fourth are selected. The S position keeps the transmission from cycling between fourth and fifth gears in stop-and-go driving.

With the shift lever in D or S, you can also use the paddle shifters to shift the transmission up or down.

With the paddle shifters, you can operate the transmission much like a manual transmission without a clutch pedal.

If you exceed the maximum speed for the gear you are in, the engine speed will enter into the tachometer’s red zone. If this occurs, you may feel the engine cut in and out. This is caused by a limiter in the engine’s computer controls. The engine will run normally when you reduce the rpm below the red zone

This allows you to move the shift lever out of Park if the normal method of pushing on the brake pedal and pressing the release button does not work. 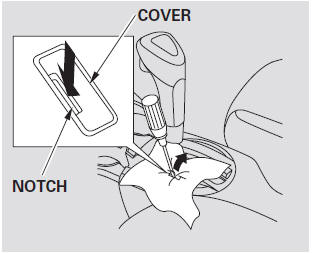 4. Insert the key in the shift lock release slot. 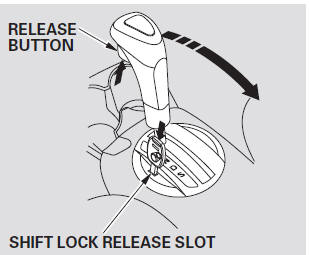 6. Remove the key from the shift lock release slot, then reinstall the cover. Make sure the notch on the cover is on the left side. Press the brake pedal, and restart the engine.

If you need to use the shift lock release, it means your vehicle is developing a problem. Have it checked by your dealer.

Obtaining Navigation Update Data
Honda is continually expanding the scope of the navigation system. Navigation system software upgrades may be made available periodically, usually in the fall of each year. To purchase an updat ...

Taillight Replacement
Open the tailgate and remove the maintenance lid. Disconnect the connectors (A) from the taillights (B). @font-face{font-family: "Honda_SymbolMar ...