The following pages provide instructions on how to properly protect the driver, adult passengers, and teenage children who are large enough and mature enough to drive or ride in the front.

1. Close and Lock the Doors

After everyone has entered the vehicle, be sure the doors and the tailgate are closed and locked.

Your vehicle has a door and tailgate open indicator on the instrument panel to indicate when any door or the tailgate is not tightly closed.

Locking the doors reduces the chance of someone being thrown out of the vehicle during a crash, and it helps prevent passengers from accidentally opening a door and falling out.

Locking the doors and the tailgate also helps prevent an outsider from unexpectedly opening a door or the tailgate when you come to a stop.

Adjust the driver’s seat as far to the rear as possible while allowing you to maintain full control of the vehicle.

Have a front passenger adjust their seat as far to the rear as possible.

The National Highway Traffic Safety Administration and Transport Canada recommend that drivers allow at least 10 inches (25 cm) between the center of the steering wheel and the chest. In addition to adjusting the seat, you can adjust the steering wheel up and down.

Sitting too close to a front airbag can result in serious injury or death if the front airbags inflate.

Always sit as far back from the front airbags as possible. 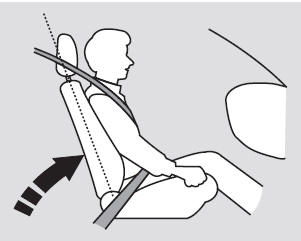 Passengers with adjustable seatbacks should also adjust their seatback to a comfortable, upright position.

Reclining the seat-back too far can result in serious injury or death in a crash.

Improperly positioning head restraints reduces their effectiveness and you can be seriously injured in a crash.

5. Fasten and Position the Seat Belts

Insert the latch plate into the buckle, then tug on the belt to make sure the belt is securely latched. Check that the belt is not twisted, because a twisted belt can cause serious injuries in a crash.

The seat belt in the center position of the back seat can be unlatched and retracted to allow the back seat to be folded up or down. This seat belt should be latched whenever the seat-back is in an upright position. 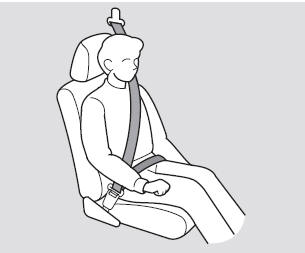 This lets your strong pelvic bones take the force of a crash and reduces the chance of internal injuries.

If necessary, pull up on the belt again to remove any slack, then check that the belt rests across the center of your chest and over your shoulder.

This spreads the forces of a crash over the strongest bones in your upper body.

Improperly positioning the seat belts can cause serious injury or death in a crash. 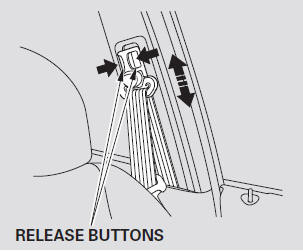 The front seats have adjustable seat belt anchors. To adjust the height of an anchor, squeeze the two release buttons, and slide the anchor up or down as needed (it has four positions).

Never place the shoulder portion of a 6.

lap/shoulder belt under your arm or behind your back.

This could cause very serious injuries in a crash.

If a seat belt does not seem to work properly, it may not protect the occupant in a crash.

No one should sit in a seat with an inoperative seat belt.

Using a seat belt that is not working properly can result in serious injury or death.

Have your dealer check the belt as soon as possible.

After all occupants have adjusted their seats and head restraints, and put on their seat belts, it is very important that they continue to sit upright, well back in their seats, with their feet on the floor, until the vehicle is parked and the engine is off.

Sitting improperly or out of position can result in serious injury or death in a crash. 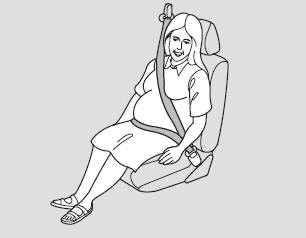 If you are pregnant, the best way to protect yourself and your unborn child when driving or riding in a vehicle is to always wear a seat belt, and keep the lap part of the belt as low as possible across the hips.

This will reduce the risk of injuries to both you and your unborn child that can be caused by a crash or an inflating front airbag.

Each time you have a checkup, ask your doctor if it’s okay for you to drive.

• Never let passengers ride in the cargo area or on top of a foldeddown back seat.

• Never let passengers ride in the area in front of a folded-up rear seat or on top of a folded-down rear seat.

• Passengers should not stand up or change seats while the vehicle is moving.

A passenger who is not wearing a seat belt during a crash or emergency stop can be thrown against the inside of the vehicle, against other occupants, or out of the vehicle.

• Two people should never use the same seat belt.

• Do not put any accessories on seat belts.

Devices intended to improve occupant comfort or reposition the shoulder part of a seat belt can reduce the protective capability of the belt and increase the chance of serious injury in a crash.

• Do not place hard or sharp objects between yourself and a front airbag.

• Keep your hands and arms away from the airbag covers.

If your hands or arms are close to an airbag cover, they could be injured if the airbag inflates.

• Do not attach or place objects on the front airbag covers.

Objects on the covers marked ‘‘SRS AIRBAG’’ could interfere with the proper operation of the airbags or be propelled inside the vehicle and hurt someone if the airbags inflate.

• Do not attach hard objects on or near a door.

If a side airbag or a side curtain airbag inflates, a cup holder or other hard object attached on or near the door could be propelled inside the vehicle and hurt someone.

Audio System
You can play music from a wide array of media sources. You can also control the audio system using voice commands. ...

Tailgate Dynamic Damper Replacement
NOTE: Put on gloves to protect your hands. Take care not to scratch the tailgate or the related parts. Remove the tailgate lower trim panal. Remove the bolts, ...