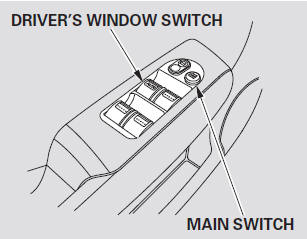 To close the window, pull back on the switch and hold it.

When you push the MAIN switch in, the switch is off, and the passenger windows cannot be raised or lowered.

To cancel this feature, push on the switch again to get it to pop out.

Keep the MAIN switch off when you have children in the vehicle so they do not injure themselves by operating the windows unintentionally.

Opening and Closing the Windows
Opening/Closing the Power Windows The power windows can be opened and closed when the ignition switch is in ON , using the switches on the doors. The driver’s side switches can be used to open ...

CKP Sensor Replacement
Raise the vehicle on a lift. NOTE: Make sure the vehicle is level, because engine oil will drip out when you remove the sensor. Loosen the bolt (A). Remove the bolt (B) and ...