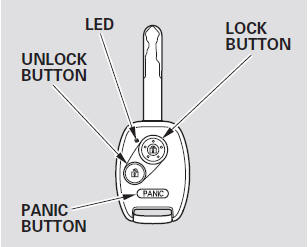 Press this button once to unlock the driver’s door. Push it twice to unlock the remaining doors and the tailgate. Some exterior lights will flash twice each time you press the button.

The ceiling light (if the ceiling light switch is in the door activated position) will come on when you press the UNLOCK button. If you do not open any door or the tailgate within 30 seconds, the light fades out.

If you relock the doors and the tailgate with the remote transmitter before 30 seconds have elapsed, the light will go off immediately.

If you do not open any door or the tailgate within 30 seconds, they will automatically relock and the security system will set.

Press this button for about 2 seconds to attract attention: the horn will sound, and the exterior lights will flash for about 30 seconds.

To cancel panic mode, press any other button on the remote transmitter, or turn the ignition switch to the ON (II) position.

• Avoid dropping or throwing the transmitter.

• Protect the transmitter from extreme temperature.

• Do not immerse the transmitter in any liquid.

• If you lose a transmitter, the replacement needs to be reprogrammed by your dealer

If it takes several pushes on the button to lock or unlock the doors and the tailgate, replace the battery as soon as possible. 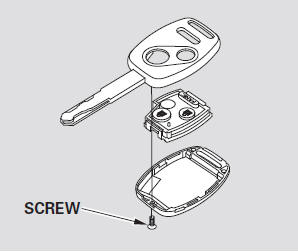 To replace the battery: 1. Remove the screw at the base of the transmitter with a small Phillips-head screwdriver. 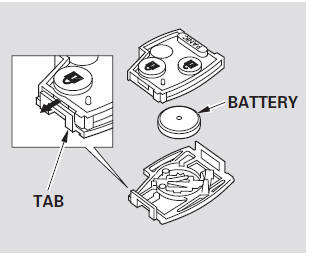 2. Separate the transmitter by prying its middle seam with your fingernail.

3. Inside the transmitter, separate the inner cover from the keypad by releasing the two tabs on the cover.

4. Remove the old battery, and insert a new battery into the back of the cover with the side facing down.

An improperly disposed of battery can hurt the environment.

5. Install the parts in reverse order.

As required by the FCC: This device complies with Part 15 of the FCC rules. Operation is subject to the following two conditions: (1) This device may not cause harmful interference, and (2) this device must accept any interference received, including interference that may cause undesired operation.

Changes or modifications not expressly approved by the party responsible for compliance could void the user’s authority to operate the equipment.