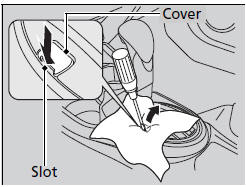 3. Wrap a cloth around the tip of a small flattip screwdriver and remove the cover of the shift lock release slot.

► Put the tip of the flat-tip screwdriver into the slot and remove it as shown in the image. 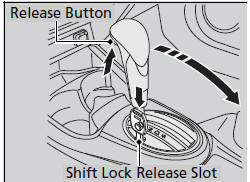 4. Insert the key into the shift lock release slot.


► The lock is now released. Have the shift lever checked by a dealer as soon as possible.

Interior Rearview Mirror
Adjust the angle of the rearview mirror when you are sitting in the correct driving position. ■Rearview Mirror with Day and Night Positions Flip the tab to switch the position. The nig ...