Adjust the driver’s seat as far back as possible while allowing you to maintain full control of the vehicle. You should be able to sit upright, well back in the seat and be able to adequately press the pedals without leaning forward, and grip the steering wheel comfortably. The passenger’s seat should be adjusted in a similar manner, so that it is as far back from the front airbag in the dashboard as possible.

The front seat passenger should also adjust their seat-back to a comfortable, upright position.

WARNING
Reclining the seat-back too far can result in serious injury or death in a crash.

Do not put a cushion, or other object, between the seat-back and your back.

Doing so may interfere with proper seat belt or airbag operation.

Your vehicle is equipped with head restraints in all seating positions.

To lower the head restraint:

Push it down while pressing the release button.

WARNING
Improperly positioning head restraints reduces their effectiveness and increases the likelihood of serious injury in a crash.

The driver’s and front passenger’s seats have active head restraints. 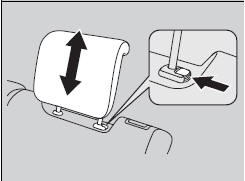 A passenger sitting in a back seating position should adjust the height of their head restraint to an appropriate position before the vehicle begins moving.

To lower the head restraint

: Push it down while pressing the release button.

Removing and Reinstalling the Head Restraints

Head restraints can be removed for cleaning or repair.

To remove a head restraint:

To reinstall a head restraint:

Insert the legs back in place, then adjust the head restraint to an appropriate height while pressing the release button. Pull up on the restraint to make sure it is locked in position.

Failure to reinstall, or correctly reinstall, the head restraints can result in severe injury during a crash.

The driver’s and front passenger’s seats have active head restraints. In a rear impact, an occupant properly secured by a seat belt will be pushed against the seat-back and the head restraint will move forward. This reduces the distance between the restraint and the occupant’s head, which helps reduce the likelihood of whiplash and injuries to the neck and upper spine.

• Do not place any objects between an occupant and the seat-back.

• Install each restraint in its proper location.

After all occupants have adjusted their seats and head restraints, and put on their seat belts, it is very important that they continue to sit upright, well back in their seats, with their feet on the floor, until the vehicle is safely parked and the engine is off.

WARNING
Sitting improperly or out of position can result in serious injury or death in a crash.

Disassembly
Raise and support the vehicle. Remove the rear wheels. Release the parking brake, and remove the brake drum. Remove the tension pins (A) by pushing respe ...