Check the condition of the wiper blades at least every six months.

Replace them if you find signs of cracking in the rubber, areas that are getting hard, or if they leave streaks and unwiped areas when used. 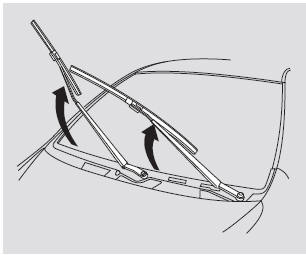 To replace a front wiper blade: 1. Raise each wiper arm off the windshield, lifting the driver’s side first, then the passenger’s side.

Do not open the hood when the wiper arms are raised, or you will damage the hood and wiper arms. 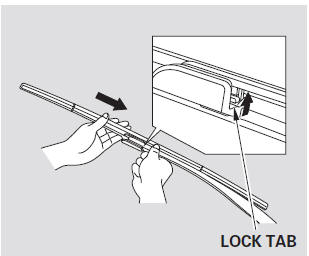 2. Disconnect the blade assembly from the wiper arm: • Press and hold the lock tab.

• Slide the blade assembly toward the lock tab until it releases from the wiper arm. 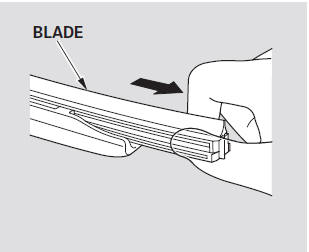 3. Remove the blade from its holder by grasping the tabbed end of the blade. Pull firmly until the tabs come out of the holder. 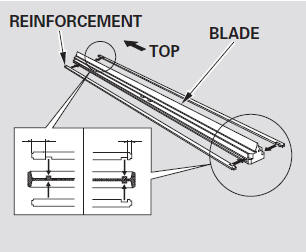 Make sure the three rubber tabs inside the blade fit to each notch of the reinforcement, as shown. 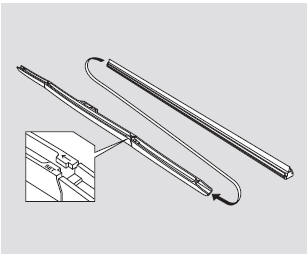 5. Place the top of the wiper blade on the end of the blade assembly, and slide the blade onto the assembly in the direction pointed to by the arrow.

Make sure the blade is completely installed.

6. Slide the wiper blade assembly onto the wiper arm.Make sure it locks in place.

7. Lower the wiper arm down against the windshield, the passenger’s side first, then the driver’s side. 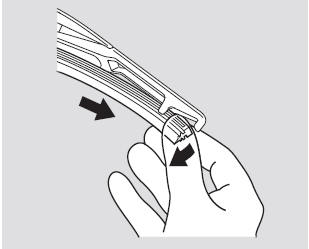 To replace the rear wiper blade:

1. Raise the wiper arm off the glass.

2. Slide the blade out of the wiper arm. 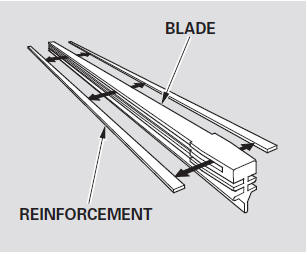 4. Slide the new blade into the wiper arm. Make sure it is engaged in the slot along its full length.

Adding Engine Oil
Unscrew and remove the engine oil fill cap on the valve cover. Pour in the oil slowly and carefully so you do not spill any. Clean up any spills immediately. Spilled oil could damage components ...

Immobilizer System
The immobilizer system prevents a key that has not been pre-registered from starting the engine. Each key contains electronic transmitters that use electronic signals to verify the key. Pay att ...