The radio can receive the complete AM and FM bands.

Those bands cover these frequencies:

Stations must use these exact frequencies. It is fairly common for stations to round-off the frequency in their advertising, so your radio could display a frequency of 100.9 even though the announcer may identify the station as ‘‘FM101.’’


How well the radio receives stations is dependent on many factors, such as the distance from the station’s transmitter, nearby large objects, and atmospheric conditions.

Eventually, the stereo indicator will go off and the sound will fade completely as you get out of range of the station’s signal. 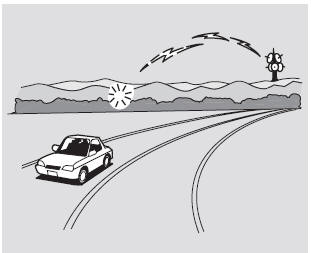 Driving very near the transmitter of a station that is broadcasting on a frequency close to the frequency of the station you are listening to can also affect your radio’s reception.

You may temporarily hear both stations, or hear only the station you are close to. 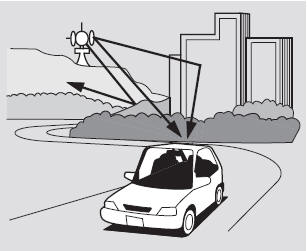 Radio signals, especially on the FM band, are deflected by large objects such as buildings and hills. Your radio then receives both the direct signal from the station’s transmitter, and the deflected signal. This causes the sound to distort or flutter. This is a main cause of poor radio reception in city driving. 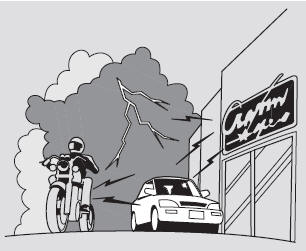 Radio reception can be affected by atmospheric conditions such as thunderstorms, high humidity, and even sunspots. You may be able to receive a distant radio station one day and not receive it the next day because of a change in conditions.

Electrical interference from passing vehicles and stationary sources can cause temporary reception problems.

As required by the FCC: Changes or modifications not expressly approved by the party responsible for compliance could void the user’s authority to operate the equipment.

If the Engine Overheats
The high temperature indicator should be off under most conditions. If the engine coolant temperature gets higher than normal, the indicator will blink. If it stays on, you should determine the rea ...

GPS System
The signals received from the GPS satellites are extremely weak (less than a millionth of the strength of a local FM station) and require an unobstructed view of the sky. The GPS antenna is loca ...