The side airbags help protect the upper torso of the driver or a front passenger during a moderate-to-severe side impact.

Do not attach accessories on or near the side airbags.

They can interfere with the proper operation of the airbags, or hurt someone if an airbag inflates.

Do not cover or replace the front seat-back covers without consulting a dealer.

Improperly replacing or covering front seat-back covers can prevent your side airbags from properly deploying during a side impact. 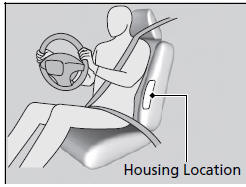 The side airbags are housed in the outside edge of the driver’s and passenger’s seatbacks.

Both are marked SIDE AIRBAG 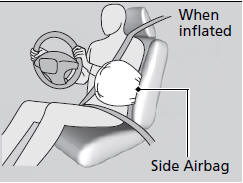 When the sensors detect a moderate-tosevere side impact, the control unit signals the side airbag on the impact side to immediately inflate.

■ When a side airbag deploys with little or no visible damage

Because the airbag systems senses sudden acceleration, a strong impact to the side of the vehicle’s framework can cause a side airbag to deploy. In such cases, there may be little or no damage, but the side impact sensors detected a severe enough impact to deploy the airbag.

■ When a side airbag may not deploy, even though visible damage appears severe

It is possible for a side airbag to not deploy during an impact that results in apparently severe damage. This can occur when the point of impact was towards the far front or rear of the vehicle, or when the vehicle’s crushable body parts absorbed most of the crash energy. In either case, the side airbag would not have been needed nor provided protection even if it had deployed.

• The position sensor detects that the front passenger is leaning into the deployment path of the side airbag. 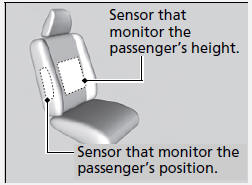 The sensors that monitor the front passenger’s height and body position may not work if: • The seat-back is wet
• The passenger is touching a metal or other electrical conductive object • A seat cushion is on the seat • The passenger is wearing excessively thick clothing

Side Airbag Off Indicator

If the front passenger is a child, stop when it is safe to do so, and have the child sit properly restrained in a rear seat.

Front Passenger's Airbag Replacement (Removal)
NOTE: If replacing the front passenger's airbag after deployment, refer to Component Replacement/Inspection After Deployment   for a complete list of other parts that must also be r ...

Changing Your Destination
There are several methods you can use to change the route destination. ...

Side Vent
Click here for an interactive version of this procedure (driver's, passenger's). NOTE: Take care not to scratch the dashboard or its related parts. Pull the upper portion (A) of the s ...